September 18, 2015
On Friday after breakfast, we headed out from the Yeka Guesthouse we were staying and stopped to visit Cherry’s.

“Cherry’s” is what we call Women at Risk, a program that helps women in prostitution get off the streets and teac them skills so that they can start new careers and create a better life.

Cherry began the ministry when she realized how hard the job market was for her, a college educated woman. She could only imagine how hard it must have been for women who were not as fortunate and wanted to help them change that.

We sat with Sabba and asked her question after question about the program and the success they’ve seen from it. For each 20 girls that go through the program, 85-90% stay off the streets. It’s pretty incredible, actually.

After Cherry’s we toured some of the museums and palaces in Ethiopia to gain a better understanding of the country we were in.

The Derg museum taught us about the communist rule of Ethiopia from 1975 to 1991. During this time, there was a mass genocide of all religious Ethiopian persons and anyone who opposed the communist government.

It was crazy to see that something so gruesome had happened so recently in Ethiopia and how it isn’t a well-known fact in the rest of the world. If it had happened in Europe or The States, it would have been shut down really fast.

While this was all very informational and stopping by Cherry’s was super encouraging for us- the best part of yesterday was more of our interactions with each other and the people around us.

There’s this mountain in Addis called Entonto Mountain. It’s about 2.5 miles high and is full of switch backs, steep hills, and barefoot children who run up and down it everyday.

It also is the daily trek for some women who climb up the mountain daily just to turn around and climb back down with 55 pounds of bundled branches strapped to their backs.

We stopped a woman during her trek down the mountain to see if we could give her a quick break and try her bundle on.

To attach the bundle, one has to put a rope (similar to the tug-a-war ones) around your neck, and then two ropes through that and around your arm pits so a) you don’t choke and b) you have something to help with the weight.

Those things are heavy. And that’s all I have to say about that. All of us tried it on, including the babies, just to see if we could. I could do it, realistically, for about 5-10 minutes without wanting to sit down and cry. I don’t understand how those women – who are incredibly tiny and some are older – do it every day. 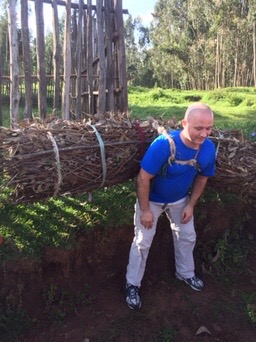 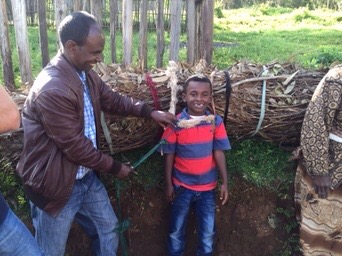 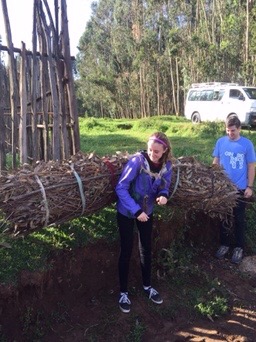 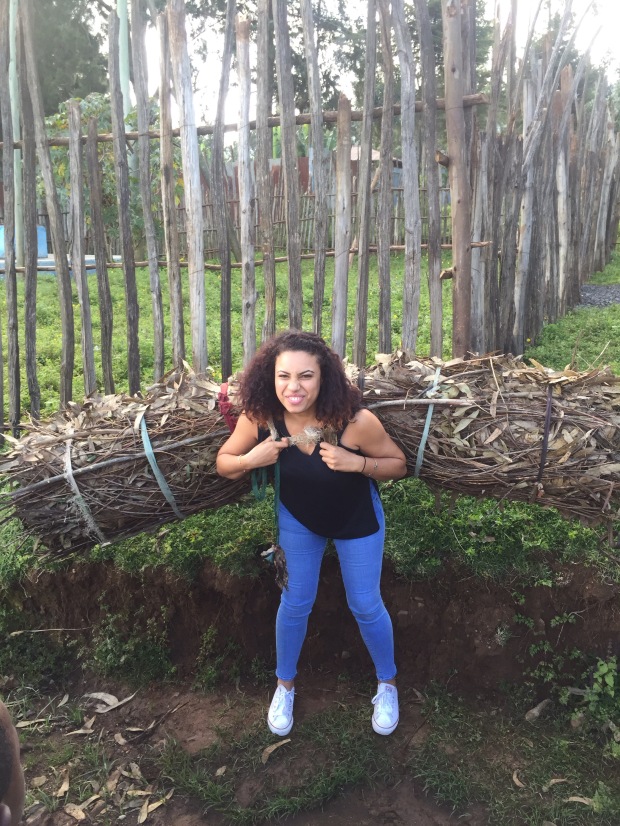 Our team of 14 people, who I should probably introduce you all to soon, has been super blessed to have the addition of our translator, Mesfin, and his son, Dan.

Dan is 7 years old and him and Nate are already besties. They do everything together, including sleepovers at the hotel and waking up early to play Jenga and soccer.

We spent some time also with Mesfin’s mother, brother and sisters where Quinn was able to confuse and frustrate Mesfin in some magic card tricks.

It’s so much fun to laugh and joke and try to test out our limited knowledge of Amharic with people- and we definitely can’t wait to go into the villages and meet more.